Skip to content
Home » What Are Vinyl Records? Everything You Need to Know

Did you overhear a group discussing vinyl records? Or, you might have encountered them while helping your grandparents clean their basement. Well, if you’ve hundreds of questions hovering over your mind right now regarding vinyl records, you’re at the right place!

In this post, we’ll dive deep into vinyl records. It’s history, its mechanism, or almost everything you might want to know about vinyl records in general; you’ll find all the answers here. Let’s begin!

What Are Vinyl Records? 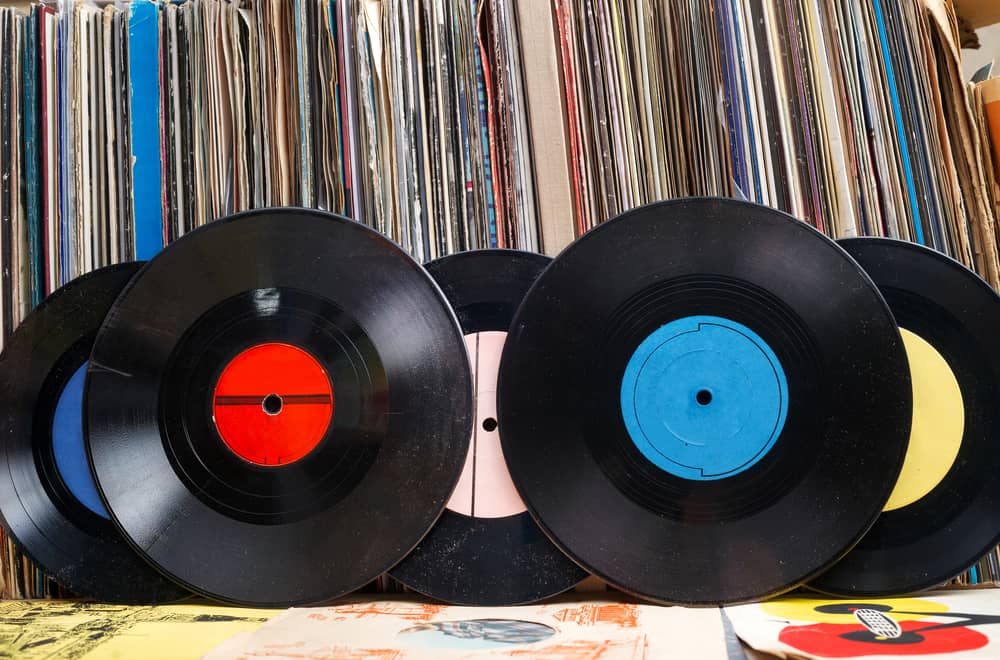 Let’s deal with the primary question first. What exactly are vinyl records? In simple words, vinyl records are simply rotating disks that are used for storing music. These analog music storage devices feature inscribed modulated spiral grooves and are typically 12 inches, 10 inches, or 7 inches in diameter.

Initially, these records were name phonograph disc records, gramophone records, or simply records and were made up of a type of resin called shellac.

Around the mid-2000s, only when Polyvinyl Chloride (PVC) was used to manufacture these records did the name ‘vinyl records’ become popular. Record players, typically called turntables, phonographs, or gramophones, are used to play and record music on vinyl records.

Phonograph records were a commercial form of music storage and reproduction since as early as the 1800s.  It slowly started gaining the largest market share around 1912, when it effectively superseded another music storage device called phonograph cylinders.

Around 1991 was the downfall in the market share of phonograph records when compact discs (CD) started gaining market popularity.

Once the primary medium of music storage and reproduction, records were now manufactured in smaller batches and was used mainly by DJs to record music of the dance genre. However, we can definitely see a resurgence of vinyl records these days.

In comparison to the early 2000s, it is evident that the popularity and sales of vinyl records are increasing remarkably, especially among music enthusiasts and collectors, and the resurgence is mainly in the rock niche.

With only 48 manufacturing facilities worldwide, as of 2017, vinyl records these days are also treated as precious antiques, and if the record you own is scare of a famous singer or signed by one, you will probably get a handsome price for the record.

How Are Vinyl Records Made? 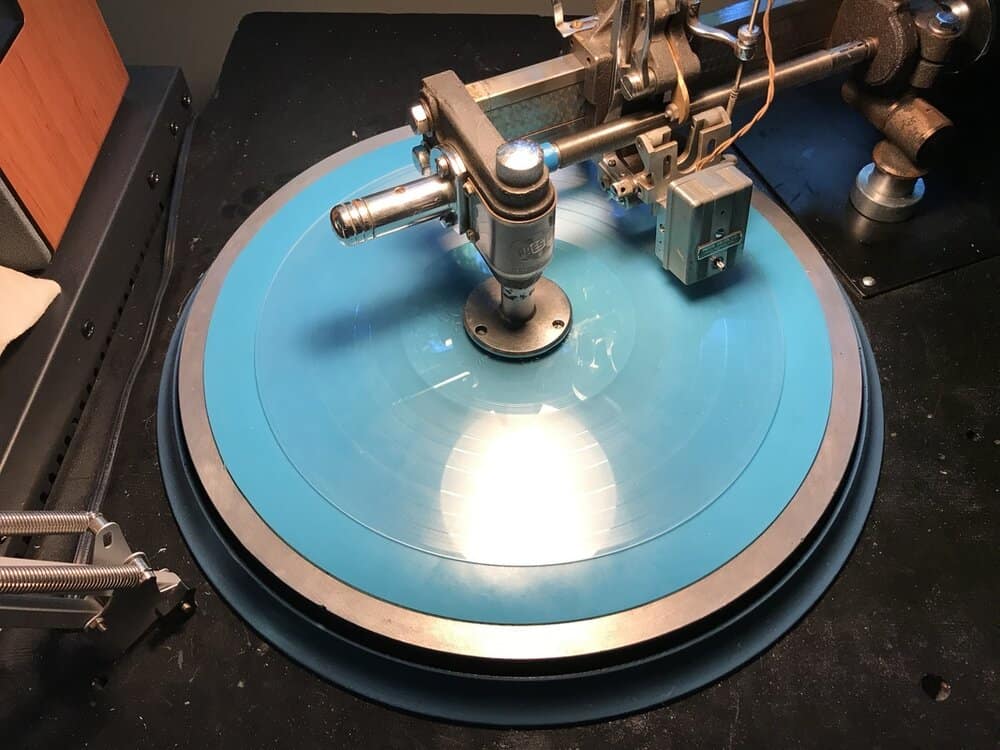 The process starts by manufacturing aluminum core master disks and coating them with nitrocellulose lacquer. Now, the disks are inspected for any imperfections. If found to be perfectly pressed, holes are punched in the middle.

Using a sapphire-tipped cutter, a cutting machine named a lathe is then used to cut continuous grooves on the disks. It is a computer-monitored process, and spacing between the grooves can be adjusted per necessity.

All the scrap lacquer produced during the process is removed using a vacuum, followed by scratching the serial number and signature on the inner edge.

In order to prepare the vinyl records, PVC pellets are melted down in a hopper into biscuit-shaped vinyl pucks. Now, the presses apply the labels to center the record and prevent the vinyl from warping.

Vinyl pucks are sandwiched between two silver stamps, and over 60 tons of pressure is applied to press the records. Once the records cool, the excess is trimmed and stored for reuse. That’s it; vinyl disks are now ready for us to enjoy!

How Does Vinyl Records Work? 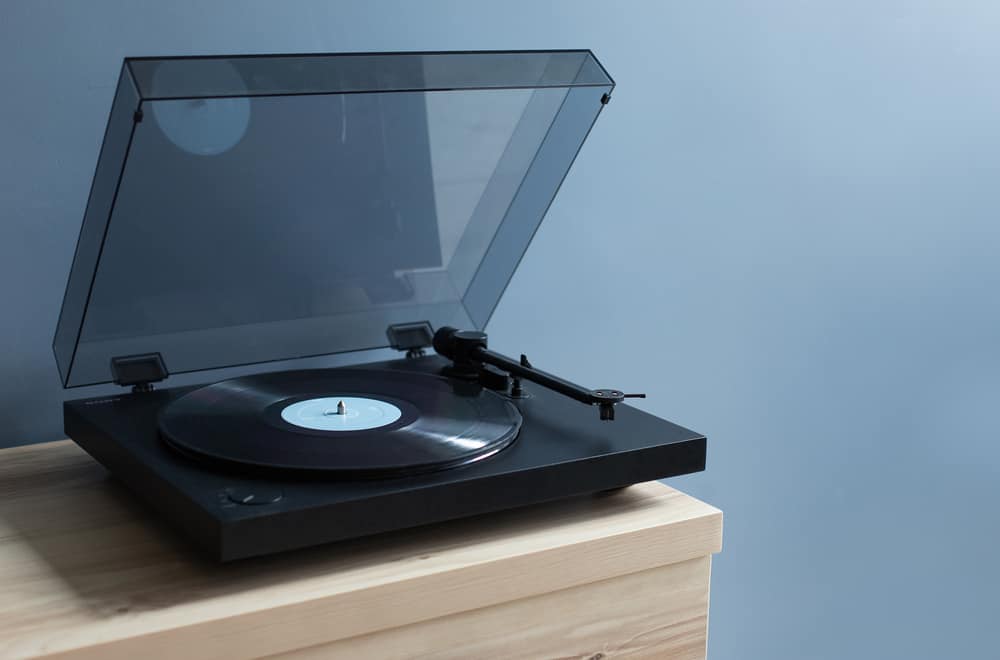 Sound waves of the music are recorded as 3D groves in the lacquer discs. When the records rotate on a turntable, the needle or the stylus moves along the 3D sound vibrations engraved within.

All the mechanical changes that the needle goes through are transmitted via a lightweight metal bar to a cartridge, an electromagnetic device containing a piezoelectric crystal.

When the metal bar slightly presses the crystal, the mechanical vibrations are converted into electrical signals, which are then fed to an amplifier and finally to the speakers as audible sounds.

How To Use A Record Player? 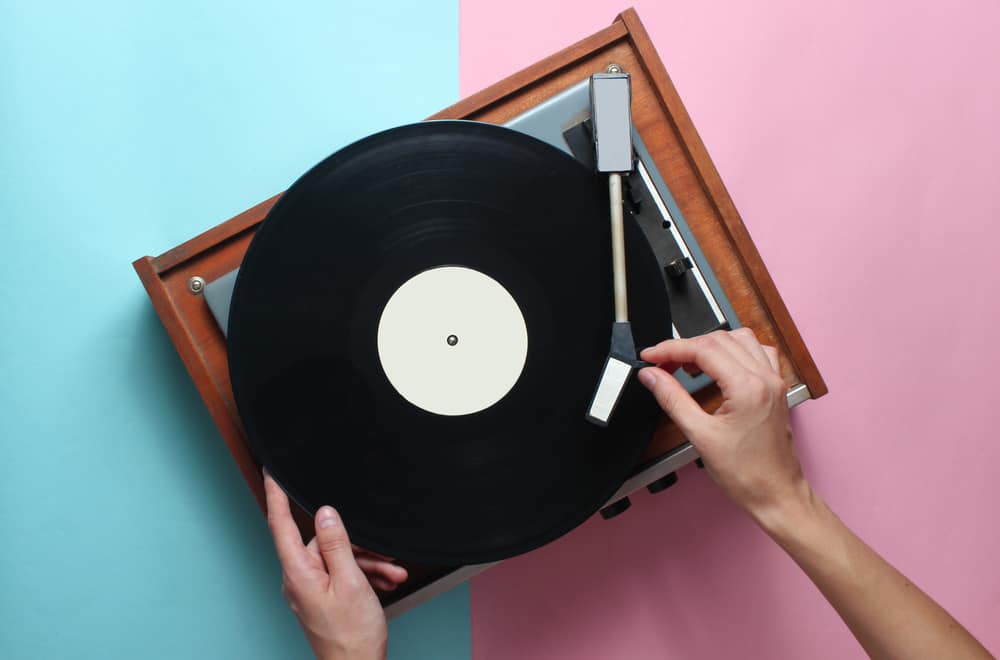 In order to play a vinyl record on a record player, you should first have knowledge of vinyl records speeds. Records come in three RPM; 78, 45, and 33 1/3.

33 1/3 is the standard for 12-inches records and is the default for almost all the turntables. However, if you want to play a 7-inch record, you must adjust the RPM to 45 to make sure the record plays smoothly. And, records that play at 78 RPM aren’t in production these days.

Vinyl records come with two sides – side A and side B. Take note of the side in which the song you want to listen to is, and make sure you lock the record appropriately on the player such that it won’t fall.

A cue lever is present next to the tonearm, which you will need in case you have to move the arm. To begin playing, one must raise the arm to the record’s outer edge and then turn on the record switch.

Once the record starts rotating, the arm must be slowly lowered down such that the needle comes in contact with the record. And that’s when you’ll start listening to the melodious sound engraved in the record.

Skipping the track isn’t a big deal either. Thin circles evidently different from the rest of the tracks are the space between the two tracks. That’s how you can identify the starting of each track.

So, to skip the music, instead of placing the arm on the edge of the record, you must start by raising them right above the starting of the track you want to hear.

Though the process sounds scary, as there might be the possibility of you scratching the record, it’s super easy once you get the hang of it! 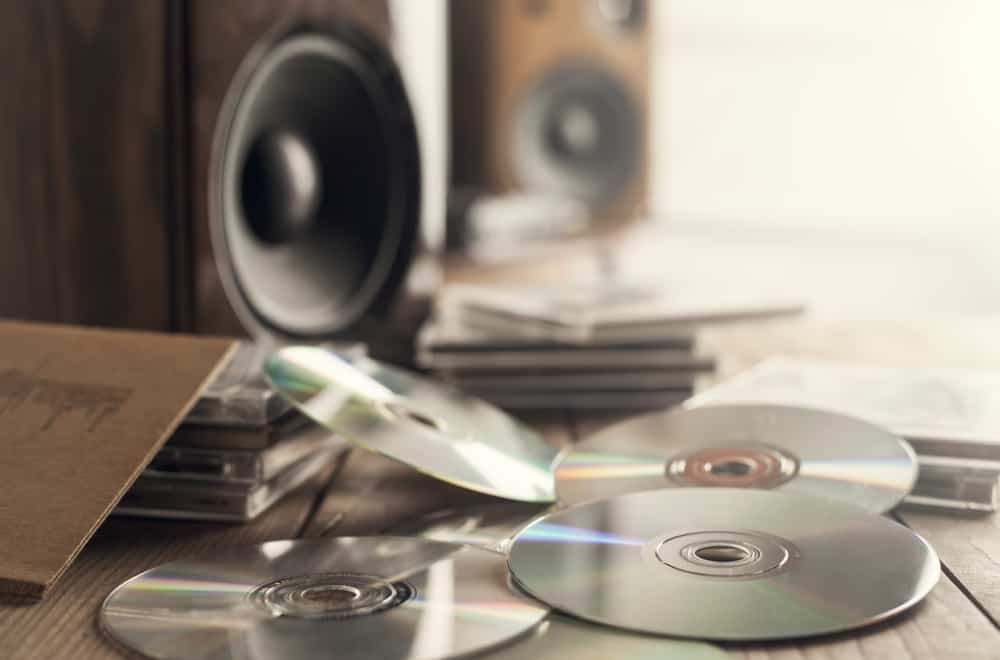 As per the sound quality, there has always been a debate – Vinyl records and CDs: which sound better? Technically, it is evident that digitally encoded sound quality in CDs is superior.

However, many vinyl record enthusiasts claim that some form of loss is evident during analog to digital conversion, and thus, vinyl sounds way better.

But the fact is that the sound quality of these two record systems are simply different, and to decide which sound quality is better is a task better left to personal preferences rather than a mass debate.

Instead, let’s discuss the conspicuous differences between the two. CDs are smaller in size, i.e., 4.7 inches, and are more resistant to damages due to heat and humidity. However, both vinyl records and CDs are equally prone to scratching.

What Are LP And EP?

As the musical era shifted from analog to digital, the term ‘LP’ still stayed in use and was meant to denote full-length or 10-12 track albums.

One often tends to get fooled by the term – ‘Extended’, but the reality is that EP records are around half in length to LP records.

It is often longer than a single, hence the name – Extended Play. It was initially released in 1952 as 10-inches records playing at 45 RPM. Initially, it could hold around 7.5 minutes long music per side.

EP records contain around 3-6 tracks lasting for around 15-30 minutes long. These records are often labeled as mini-albums and were one of the popularly used formats by artists due to their budget-friendliness. And, with the increasing fame of Elvis Presely, Walt Disney EPs, these record formats started appealing to die-hard fans then.

We believe we’ve answered all of the burning questions regarding vinyl records. If you have some priceless records in your collection, you might already know by now that you can sell them to earn some good money.

If not, it is still quite smart to remain abreast of once trendy music technology, isn’t it? So, if you have any further questions regarding vinyl records, we’re happy to answer!