Do you own a bunch of vinyl records and wondering what their worth might be? Vinyls don’t seem to go out of fashion despite the emergence of new ways of listening to music, such as C.D.s and the cloud. There are still many people willing to pay large sums of money for certain records.

Vinyl records value depends on many factors. Although vinyls are considered vintage collectibles, age alone is not the only quality determining how much you can get when you sell your records.

It is important to know the value of your records to avoid expecting more than they are worth or selling them for far less than their real market value.

In this post, I will explain some of the crucial factors that affect vinyl records value. Please note that this list is not exhaustive, and the features that affect the value of a record keep changing.

The most important qualities affecting vinyl records value are:

1. The Condition of the Record 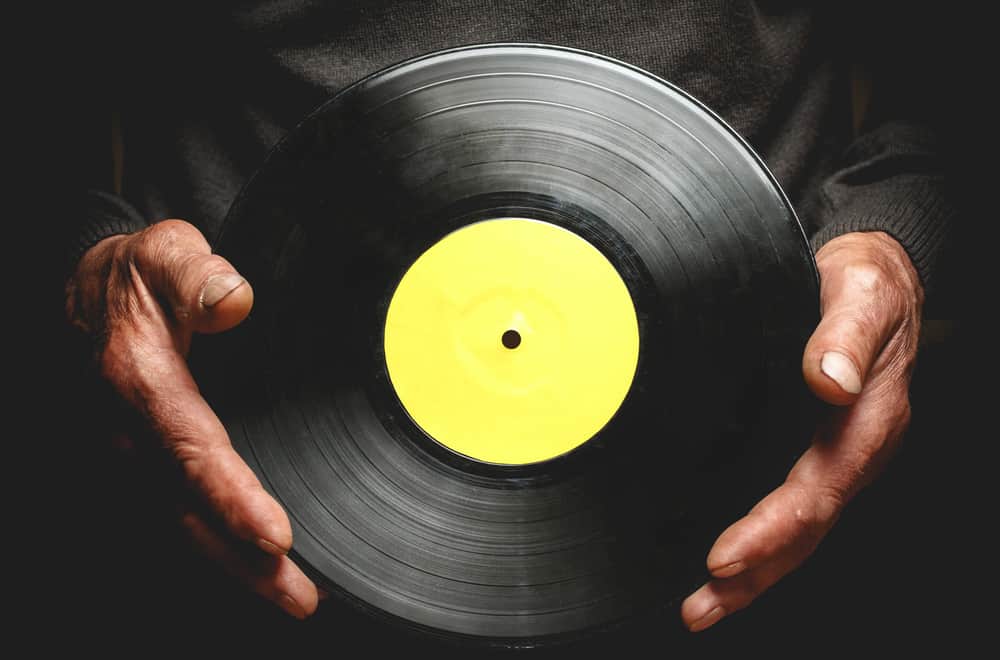 One of the first qualities collectors look at when determining the value of a vinyl record is its condition. Ideally, collectors prefer buying records in pristine condition or at least those that have only been slightly used.

Most mass-produced records that were popular in their day have generally undergone a lot of use and abuse. Vinyls with scratches, writings, abrasions, and scratches are likely to have a lower value.

Damaged or worn records are generally unplayable and therefore don’t attract the interest of collectors. If you have a bunch of old records you cannot play on a turntable, they are probably not worth much.

It is hard to find records that are more than 20 years old and in mint condition. In those rare cases when a collector finds such a record, they’d be willing to pay a premium price for it.

That said, a rare record that is slightly worn out stands to be more valuable than a worn-out popular, readily available record.

2. Name Of The Artist 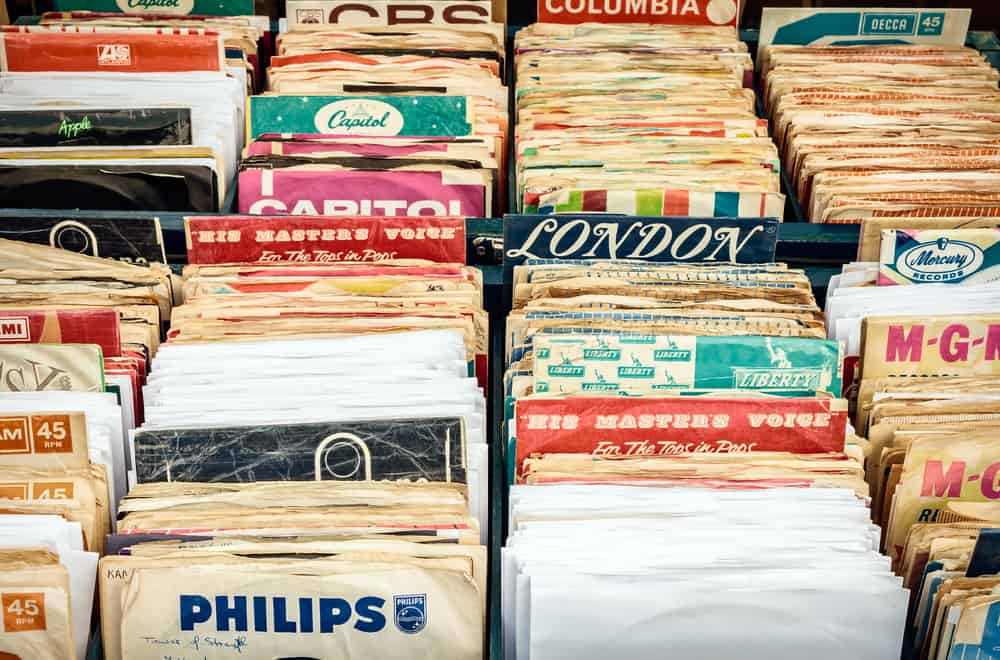 We buy and treasure music from artists we love. When it comes to evaluating vinyl records’ value, the artist’s name plays a big role.

Artists such as Elvis Presley, the Beatles, the Rolling Stones, the Mamas, the Papas, Jethro Tull, the Bee Gees, etc., were incredibly popular. Equally, their records tend to be more collectible many years after they stopped recording.

That said, some artists who never gained fame in their day may suddenly be made famous. For example, a modern-day celebrity may do a rendition of a song by a little-known artist. If the rendition becomes popular, the original artist may also become popular, and the value of their records may shoot up.

3. Availability In The Market 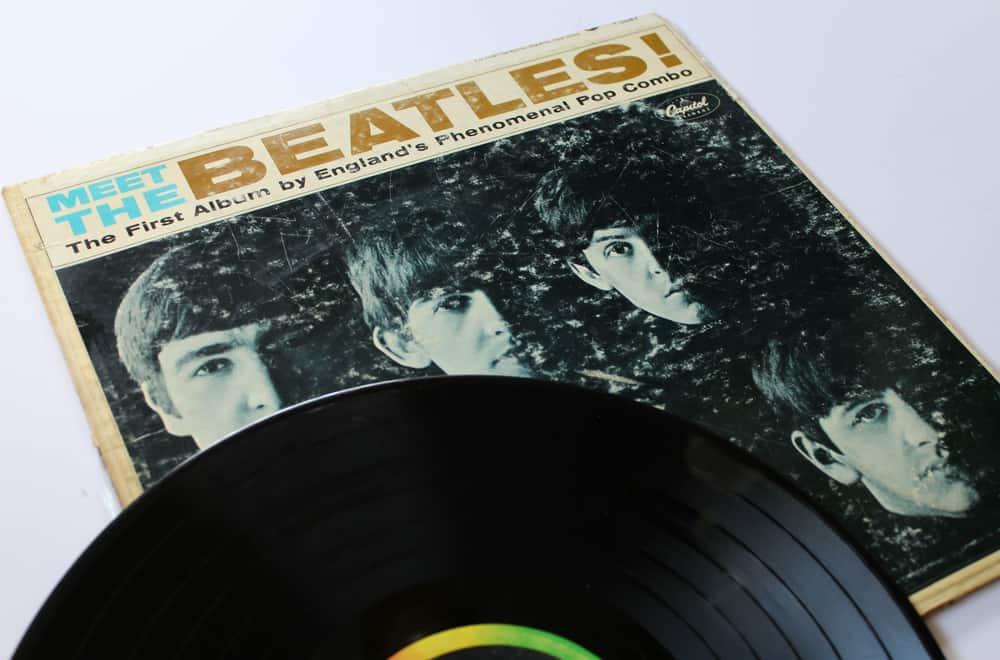 According to the law of supply and demand, the rarer a vinyl record is, the more valuable it tends to be.

Many factors create a situation of rarity in the vinyl records market, and we will take a look at them in a bit.

Most popular records, especially in genres such as rock and roll, soul, pop, and jazz, were released in millions, and as such, it is not hard to find these records. Popular as they were, these readily available records won’t fetch as much money unless there is something particularly special about them.

However, some once-popular records may become scarce, increasing their market value exponentially. For example, records by the Beatles and Rolling Stones were very popular, selling millions of copies. But, finding a Beatles or Rolling Stones vinyl album in good condition can be quite difficult.

The rarity of these once-popular copies in mint condition makes them attractive to collectors, who would be willing to part with good money in exchange for such a record. 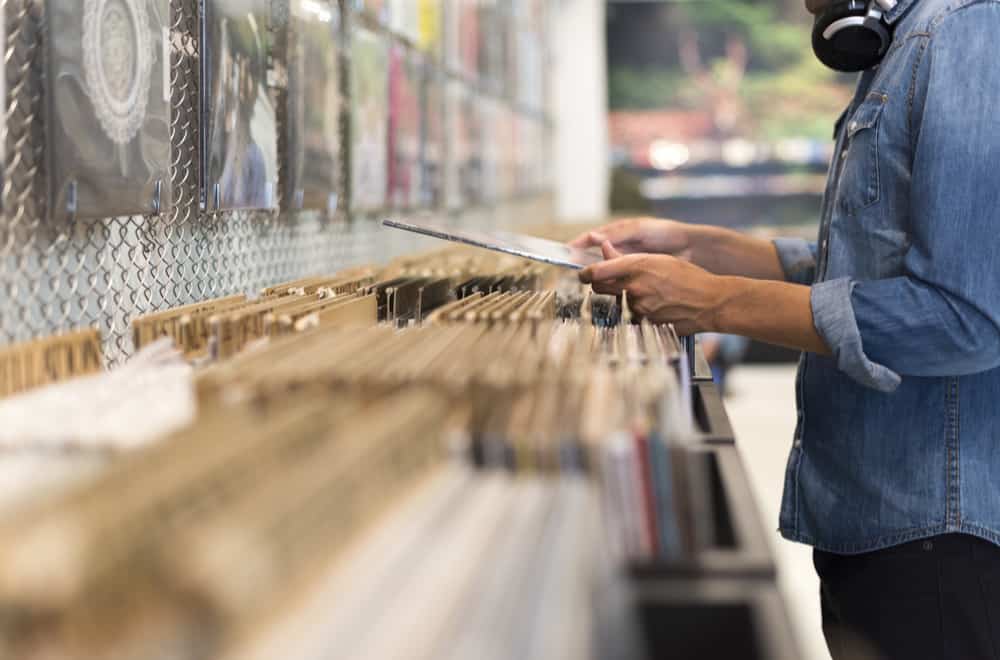 As much as they are interested in the condition of a record, collectors also tend to be keen on the record’s label and artwork.

If you have all the copies of a single album, each with its own label design, such a collection might interest collectors and attracts a high value.

That aside, regardless of how many labels an album has, the original label tends to be more valuable. Of course, albums by famous artists generally sell for a lot more money, whether they are the first or fourth issue.

Most record companies packed their records in picture sleeves. But what would really set apart one album from another was the artwork on the sleeve. The more interesting the artwork, the more sought-after the album would be.

Some picture sleeves are rare and will instantly increase the record’s value in the collectors’ market. Records that come with picture sleeves with the artist’s name, the album’s title or song (in the case of singles), and a photograph attract a higher price than one that comes in a plain sleeve. 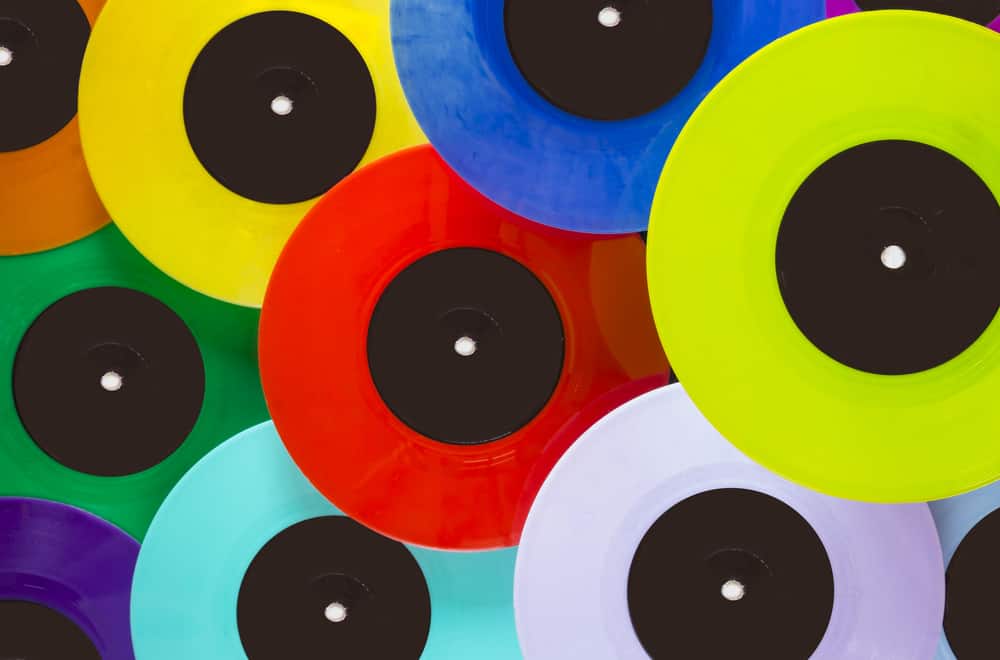 With few exceptions, vinyls pressed in a color other than black have a higher value. These colored records tend to be limited editions and are scarce in the market, making them attractive to collectors.

Record labels would produce colored copies of promotional vinyls to attract radio programmers. While most vinyls are black, some popular albums would be issued in red, green, or even yellow vinyls.

Although there are some commercial releases of colored vinyl records, most of these were promotional releases. Of course, promotional copies were produced in few numbers, making them hard to find.

Aside from colored vinyls, record companies would also try to make an album stand out by producing and distributing picture discs. Picture vinyls feature a photo of the artist or some other interesting graphics to attract buyers’ interest.

As a general rule, picture discs and colored vinyls were produced as promotional items, and only hundreds of copies were distributed at any given time. As such, these vinyl records tend to be more valuable than the regular black vinyl. 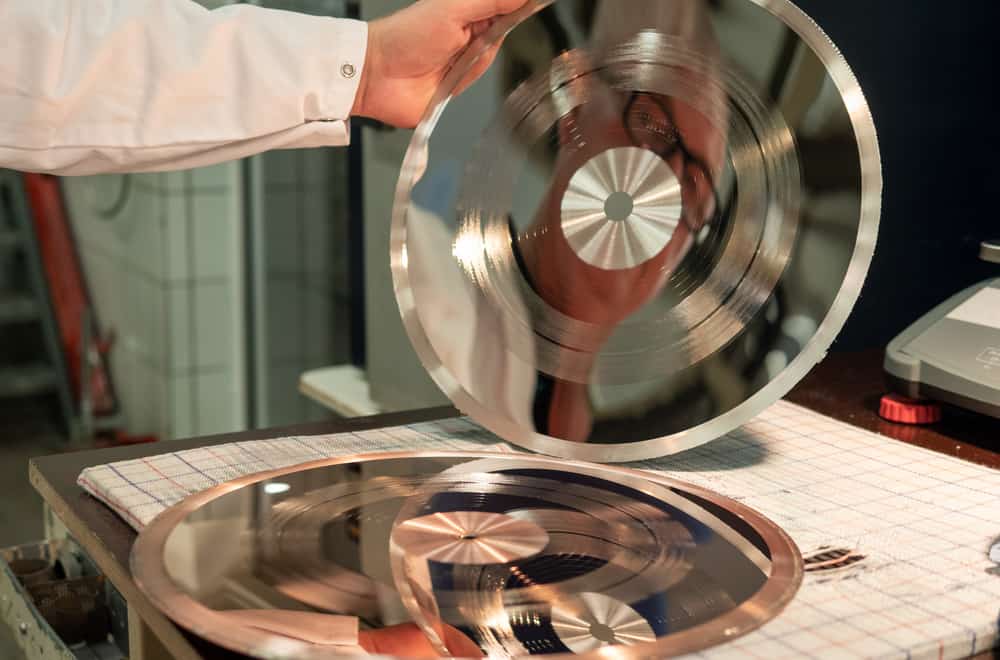 Lacquers, also known as acetates, are individually cut vinyl records and are the first copies made in the record production process.

Acetates are typically produced for in-house use only but may occasionally be sent out to radio stations as a promotional item. Record labels produce an acetate to check sound quality in the studio before mass-producing a record.

Because they are produced individually, lacquers can be particularly hard to find in the market. They are distinguishable from the post-production, mass-produced records, as the lacquers feature a white label and blank lines where staff at the record company can handwrite the name of the artist and album title.

Due to their rarity and the fact that they were meant for in-house use, acetate copies can fetch quite a handsome amount of money. But, this will depend on other factors such as the artist, the condition, and scarcity of the actual record. Acetates of records by popular artists such as Pink Floyd or Queen will face more demand and attract a higher market value than lesser-known artists. 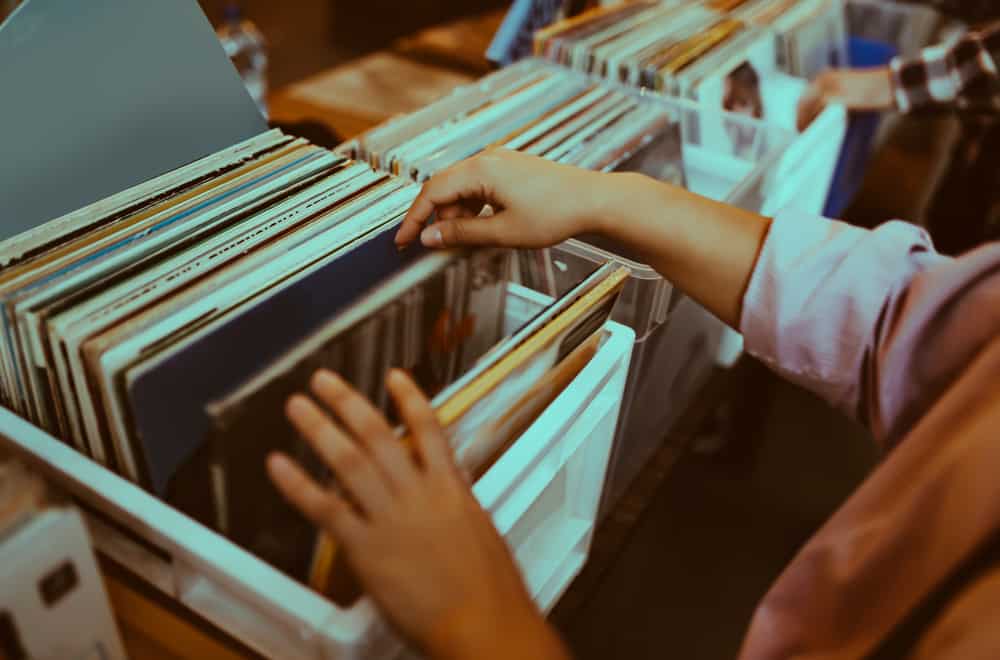 The United States and the United Kingdom are home to the majority of record companies. Vinyl records from these countries are typically more or less the same. But, an album’s edition produced in the USA can sometimes look and sound different from one produced in Singapore or Malaysia, for example.

Due to these sometimes nuanced differences, collectors in the USA and U.K. can place a premium value on records of popular artists made in foreign countries. An even slightly unusual album will draw the attention of collectors.

For example, foreign records can sometimes come in a different color, label, cover, or title. The album itself might also contain a song with a different ending from the U.K. or U.S. version.

Generally, foreign releases of an album tend to draw the attention of U.K. and U.S. collectors if the version is different from what the collectors are used to.

Another factor that will affect the vinyl records value is whether the record is a limited edition. It is now common for record companies to release a few hundred copies of an album, creating an intentional scarcity.

Record companies resort to producing limited editions of an album, mostly to keep costs low. Today, vinyl records are not as popular as they were; there are alternative methods of listening to music, and it wouldn’t make economic sense to produce millions of vinyl records.

Producing a limited number of a certain record and informing the public about it can generate a frenzy, with collectors willing to pay a premium price for the record.

If you want to sell some of your treasured vinyl records, understanding their value beforehand will help you get the most from them.

Before trading your records, do your due diligence to make a smart decision. Luckily there are tools such as books and online resources at your disposal to find out the vinyl records value of your collection.

This post has only covered a handful of factors that go into determining the value of vinyl records. Use this information as a guide to navigating the exciting world of buying and selling vinyls.