Skip to content
Home » How To Play Vinyl Records?

Vinyl records are undoubtedly making a comeback. So, it’s time to dust off the old vinyl record player in your grandparents’ basement and make good use of them.

However, using record players is not like using modern-day electronics. Though quite easy, you might need to get the hang of it in order to be able to play the records and skip records smoothly.

But, don’t you worry! In this post, we’ll dive deep into the topic – ‘How to play vinyl records?’. Let’s begin!

What are vinyl records?

Many of you might not even know what vinyl records are. And, rightfully so. In this modern era featuring advanced music storing electronics, vinyl records are more of a vintage item. So, let’s begin with a short introduction to vinyl records.

Initially, these records were made up of shellac, which later on proved to be brittle and more prone to shattering. It was around the 1940s when manufacturers started making use of Polyvinyl chloride (PVC) for the purpose. Hence, the name ‘vinyl records’ started becoming popular.

Likewise, these records can be played in three major speeds or as commonly known as Revolution Per Minute (RPM) – 33 1/3, 45, and 78. These days, records playing at 78 RPM are no more in production. 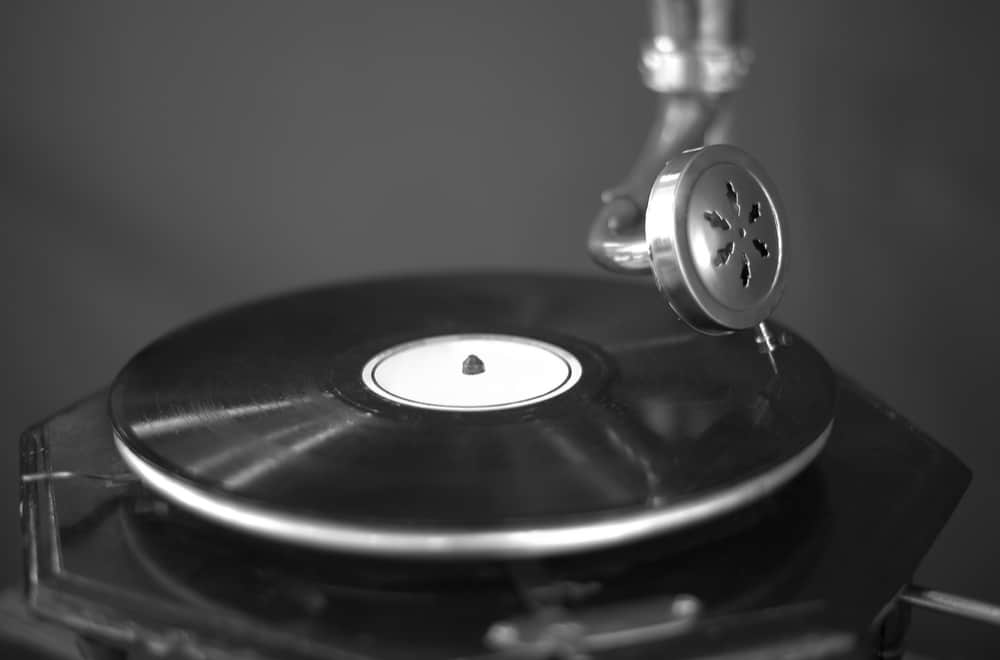 The disc records culminated in the 20th century. Phonographic cylinders were also widespread at the time, but these records were able to supplant them by 1912.

With time and inevitable advancements in technology, compact discs started gaining the majority of market share, and with that, the downfall in the commercial success of vinyl records began.

However, the records never completely left the market and were still sold in smaller quantities, especially in dance and music genres, during the 1990s and the early 2000s.

During the early 21st century, the resurgence of rock genre vinyl records was conspicuous. The sales and production of vinyl records during the 2010s increased many folds since the late 2000s.

By 2017, there were 48 record manufacturing companies worldwide. Due to the limited circulation and the consequential scarcity of records, vinyl records these days are treated as rare antiques and are desperately sought after by collectors and music enthusiasts.

What are used to play vinyl records?

Before we find out what device is used to play vinyl records, let’s look at the brief history of many inventions devised to record and play sounds.

One such machine is the phonautograph invented by  Édouard-Léon Scott de Martinville. The mechanism of this device was that a thin parchment diaphragm, connected to a bristle, upon detecting the sound vibration in the air, would allow the bristle to draw on a thin soot coating on a paper wrapped around a cylinder.

However, phonautographs were limited to recordings and weren’t able to reproduce sounds until 2008, when the American audio historians, with the help of optical scanning and computers, first converted the phonautograph recordings into audible digital files.

After the phonautograph, another inventor Charles Cross also had a concept of paleophone, intended to record as well as reproduce sounds. Nevertheless, this concept didn’t take shape before the invention of widely famous record players – phonographs.

Thoman Edison invented the phonograph in 1877. The early phonographs were tinfoil machines devised for recording and replaying sounds. Edison further tried to improvise the machine. But it was Alexander Graham Bell who improved Edison’s phonograph and commercially marketed them as graphophones.

With time, as any other invention does, phonographs also went through numerous technological advancements. With the advancements of turntables and tome arms, finally, modern record players were designed. 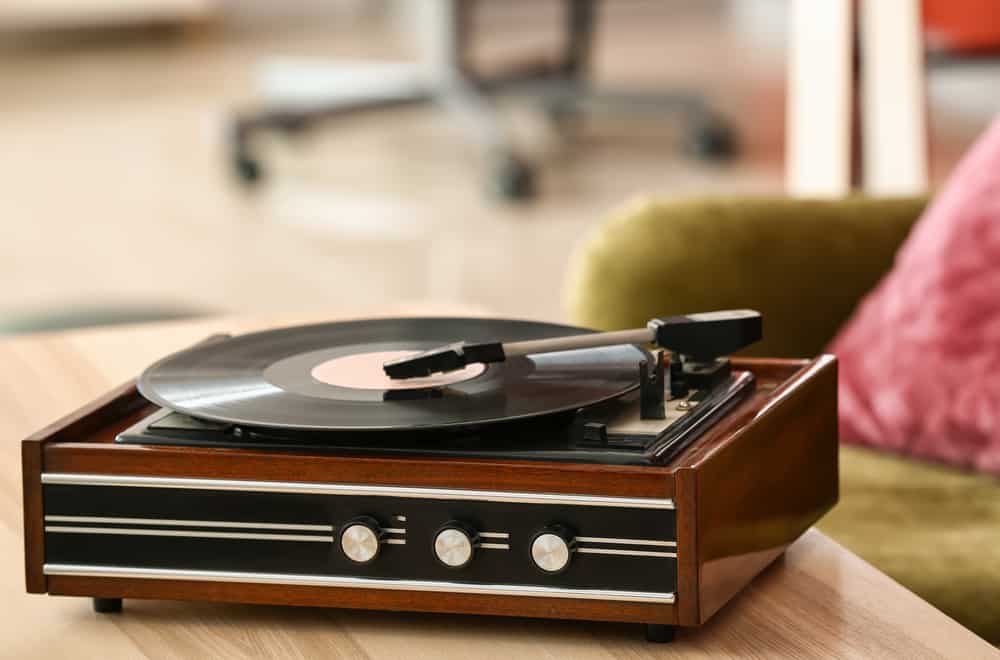 Before trying to educate oneself on how to play vinyl records, one must be acquainted with the parts and terminologies of a record player. Let’s start by knowing what a turntable is.

Record platters are the circular revolving plates on the record player that holds the records in place. Depending upon the speed set on the player, this part of the turntable spins the vinyl records at a constant speed.

Record platters are prone to scratches. So, many manufacturers prevent such mishaps by covering the platters with a felt or plastic protective layer.

A record player arm is often located beside the platter and is user-adjustable. It further contains two major record player components – a needle and a cartridge.

The needle or the stylus has a diamond or sapphire tip on one end. It is connected to a cartridge on the other end.

When the platter spins, so does the record. Once the needle is placed appropriately, it runs along the grooves engraved with the fingerprint of the soundwaves of the music that the record contains.

The needle detects the mechanical change, and this energy is passed to the cartridge via a thin metal bar.

A cartridge is an electromagnetic device containing a magnetic field. This part of the record player is responsible for converting the mechanical energy to sound energy.

Preamp plays a role in converting phono signals to line-level signals for them to be ready for the output. Before the output is fed to the speakers, it makes sure that the weak phonograph sound is amplified enough to be audible to human ears.

Many record player models feature a built-in preamp. So, if you’re a beginner to record and record players, it is best to opt for such models as you don’t want to waste your time and effort figuring out the technical stuff.

In most of the case, your record player probably has in-built speakers. But even if it does, you might want to get yourself a good pair of speakers, especially if you’re a music enthusiast. We recommend you do so because the in-built speakers generally aren’t loud and captivating enough.

And, if you want to about all this wire and connection hassle, simply invest in a Bluetooth speaker.

How to play vinyl records? 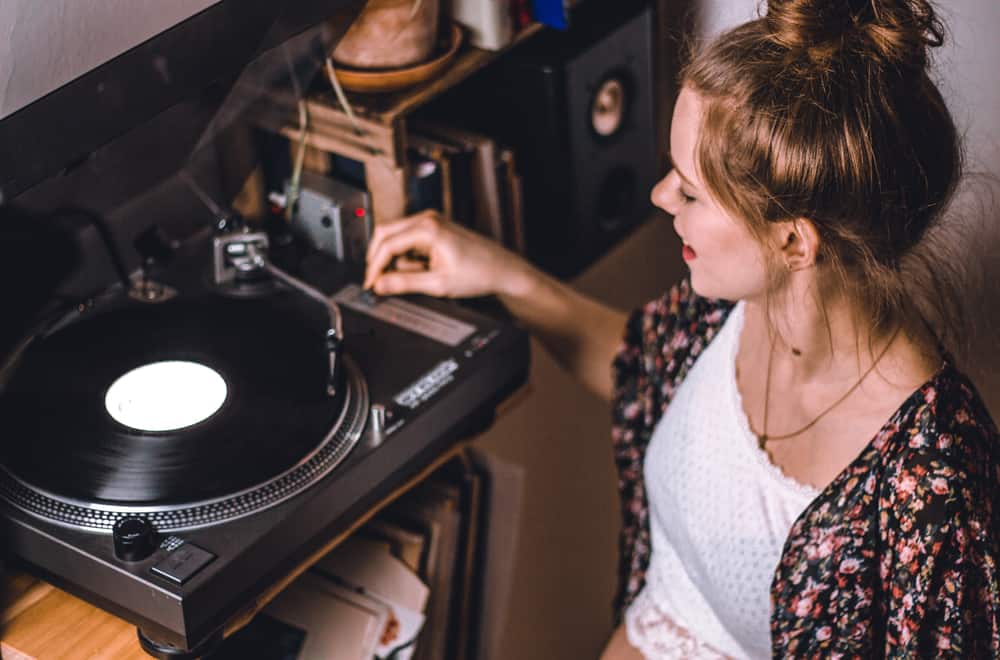 Now, finally, we’re onto the good part. So, how do we play vinyl records? Let’s see how!

1. Figure out the details first

As we all know, records come at various speeds. So, firstly, know what type of record you own, and the appropriate speed for playing it, as not doing so can result in distorted sounds.

The majority of record players have a default speed of 33 1/3 RPM. And if the record you own needs to be played at 45 RPM, adjust the setting accordingly.

Likewise, if you have 7-inch singles, you should add a 7-inch adapter to your record platter in order to hold the record perfectly in place.

Also, figure out on which side of the vinyl record the song you want to listen is. Records generally come with two sides – side A and side B.

2. Place the tonearm in the position

Once you put the record in place, it’s time to raise the cue lever and place the arm exactly above the starting of the record disc.

Turn on the switch to spin the record. Now, gently lower the cue lever to make sure that the needle touches the groves on the record. As the needle runs along the grooves, the melodious sound you’re expecting begins to entertain the surrounding.

How to skip tracks on vinyl records?

By now, you already know that playing viny records is something that anyone can do with a little guidance. However, many are afraid to change or skip tracks using the player. While the fear of scratching the record is valid, skipping tracks doesn’t need to be such a scary task either.

The thin circular segments on the record, which look evidently different from the rest of the record, are the space between two tracks. By observing these, you’ll be able to figure out where one track ends and the other starts.

So, in case you want to skip a track or two, just place the tonearm above the starting of the song you want to listen to instead of placing it at the edge of the record. Once that’s done, turn on the player, lower the arm, and you should be able to hear the track of your choice.

With this in-detail guide on how to play vinyl records, we believe in having answered all your questions regarding the topic. Follow each step carefully, and you should definitely be able to play the vinyl records without scratching them.

Let us know if you have any more queries. And, from one audiophile to another – enjoy the records!