Skip to content
Home » How Does a Vinyl Record Work?

It’s not uncommon to wonder how a simple disc, a vinyl record, produces such euphonious sound once it starts spinning on a player. No doubt, this invention is truly magical!

For your convenience, this comprehensive guide is all you’ll have to read to order to understand the genius behind vinyl records.

How are vinyl records made, how they work – we’ve elaborated everything in such detail that even a record noob will be a vinyl record erudite. Let’s begin!

If you’re trying to understand the mechanism behind vinyl records, understanding sound waves is a must. Sounds are produced by vibration and travel as waves through the air. Once the vibrations reach human ears, they vibrate the eardrums, and that’s how we hear sounds.

Now, these vibrations are engraved in vinyl records, or to be accurate, in lacquer discs, as grooves. These sound wave 3D fingerprints are then read by a needle to produce the audible sound we enjoy.

How are vinyl records made? 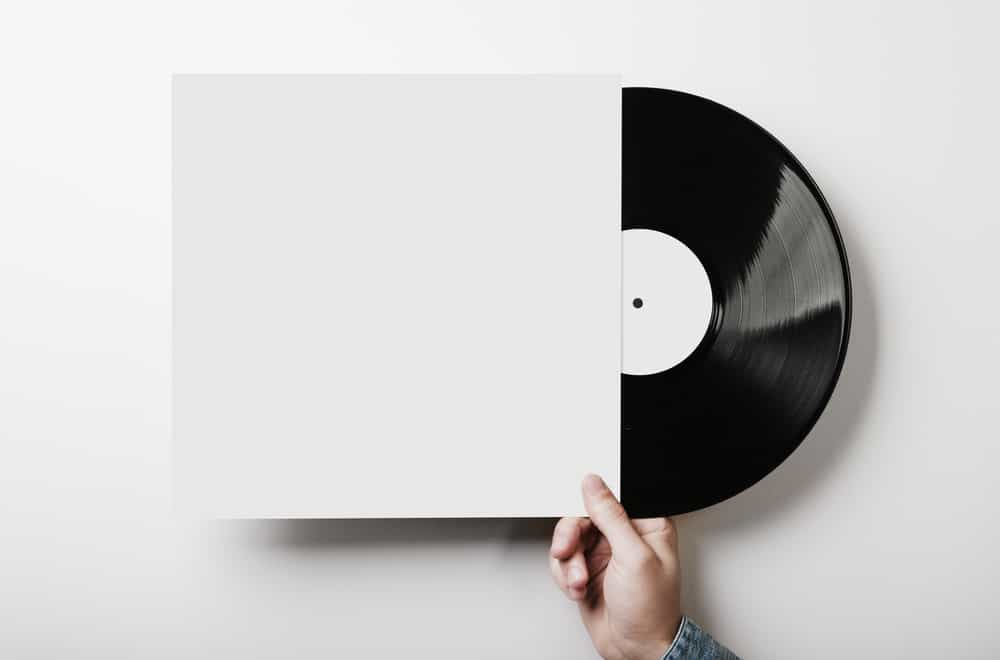 Manufacturing vinyl records are quite an elaborate process. Let’s look at the process in detail, shall we?

The process starts by coating the aluminum disks with nitrocellulose lacquer. Once the discs are covered, they are expected to have a mirror finish. Thus, record makers inspect for any imperfections before moving on to the next step.

If a disc is flawless, holes are punched in the middle, and the discs are ready to be recorded.

By now, we all know that the grooves in a vinyl record are the fingerprints of the sound wave of the music or recording we want to hear. Interestingly, when looked through a microscope, you can see an exact replica of the soundwave.

The continuous grooves are cut with a sapphire-tipped cutter by a lathe machine. A computer is used to monitor this step, and adjustments are made in the grooves as per the requirement.

All the excess lacquer is removed using a vacuum. Once vacuum cleans the discs, manufacturers scratch the signature and the serial number on the discs.

The needle on the record player cannot play sound from the grooves present on the metal discs. So, the manufacturers need to press vinyl discs with the same engraving as the master disc. That is the reason why the next step of manufacturing vinyl discs is where we create a stamper.

The lacquer layer is washed and made sure that no human fingerprints or other items touch the layer. Once washed, these discs are slowly moved in a turntable, and a silver nitrate mist is thoroughly sprayed atop it.

The silver accurately penetrates the grooves present on the lacquer layer to make a negative copy of it. Then, the silvered discs are submerged in a container containing nickel solution. The container is connected to electric terminals for the electroplating procedure.

Once the discs are dipped in nickel for some time, the plating of nickel on the disc hardens the layer enough to separate it from the master disc. These two layers are separated, and the negative metal copy of the master disc is called a stamper.

One stamper can press 100s of vinyl records or even 1000s before they worn out or discolor. However, once we have our master disc prepared, we can prepare as many stampers as we like.

The negative mold, i.e., stamper, is used to press the vinyl records. To begin, the manufacturers melt Polyvinyl Chloride (PVC) pellets in a hopper to create biscuit-shaped pucks. These soft vinyl pucks are placed in the middle of the press.

Two negative molds are attached to the press on each side of the vinyl slabs. The center labels are placed atop and below the puck. Finally, the center pins emerging from the center of the stampers hold the labels in place.

Now, the stampers are heated up to around 140 degrees, and over 60 tons of pressure is applied to the puck. Doing so ensures that the vinyl pucks are pressed into records that share the same groove features as our initial master disc.

Once the records cool, these are placed on a trimming turntable to remove all the excess vinyl from the edges. Many manufacturers reuse this vinyl for the next batch of vinyl record pressure. Finally, these perfectly round vinyl records are ready to be used by music enthusiasts and audiophiles like you and me.

Components of a vinyl record player 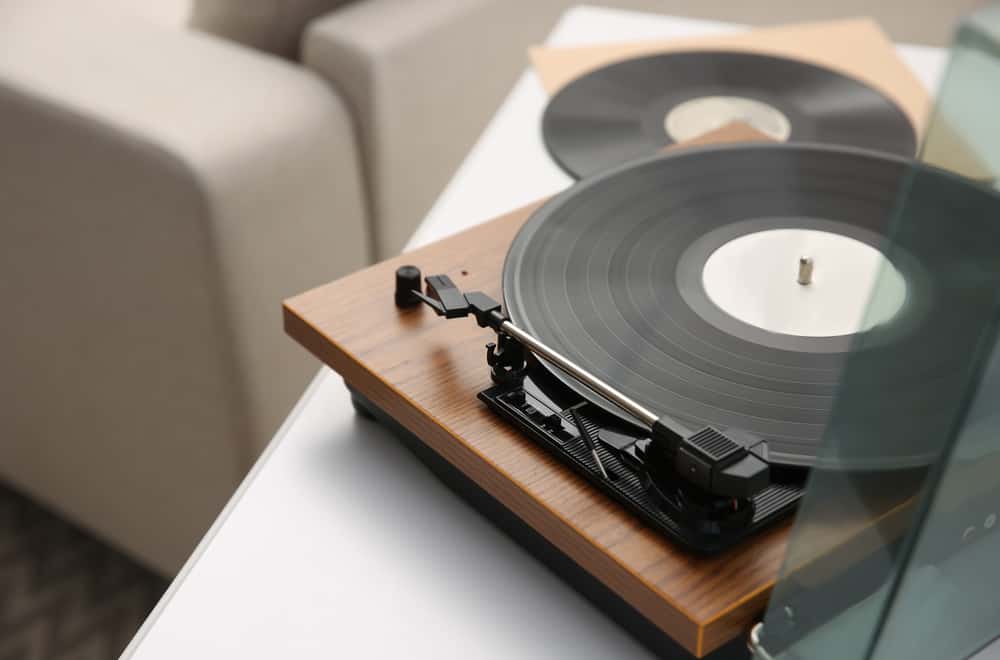 The plinth is the base of the record player that holds everything in place. It can be made up of either wood, plastic, or metal. This part of the player also comes in a variety of stand-out colors for aesthetic purposes.

The record platter consists of a plate and a metal rod in the center, which holds the vinyl record in place. As per the player’s setting, it can spin at consistent speeds; 33 1/3 RPM, 45 RPM, or 78 RPM.

In order to prevent platters from scratching, a felt or plastic protective layer is often coated on them by the manufacturers.

The tonearm is the player arm consisting of the needle and a cartridge. One can easily move around this part of the playing by adjusting a cue lever.

Turntable stylus is also commonly called a needle. This needle runs through the record grooves and is connected to a small electromagnetic device called a cartridge.

The small electromagnetic part of the player which is responsible for converting the stylus readings into the electrical signals is called a cartridge.

Some players feature a built-in preamp, while others require you to install it externally. Preamps are responsible for amplifying weak electrical signals.

Like preamp, speakers can be built-in or external and are responsible for emitting the audible sound from the player.

How does a vinyl record make a sound on a record player? 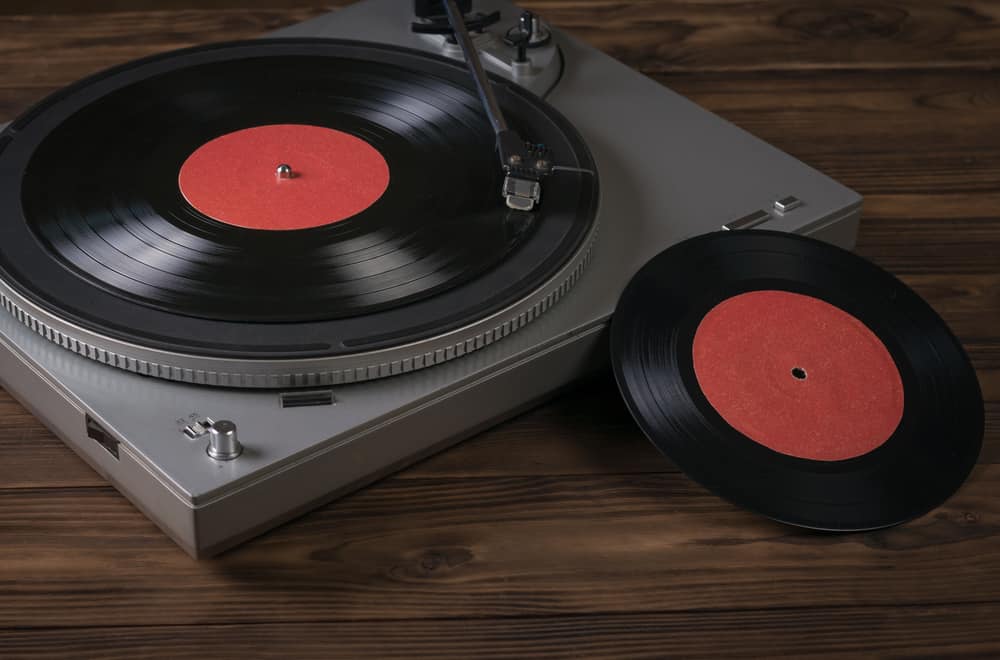 1. Needle detects the mechanical changes on the groove

First, the stylus runs along with the record etching and reads the changes in the sound wave. It then passes the vibration to the cartridge via a lightweight metal bar, i.e., each time there’s mechanical change, the needle presses against the metal bar, which then sends the signal to the cartridge.

The wire coil inside a cartridge and the magnetic field surrounding it are responsible for converting these vibrations into electric signals.

3. Output via the speakers

Is your record crackling? 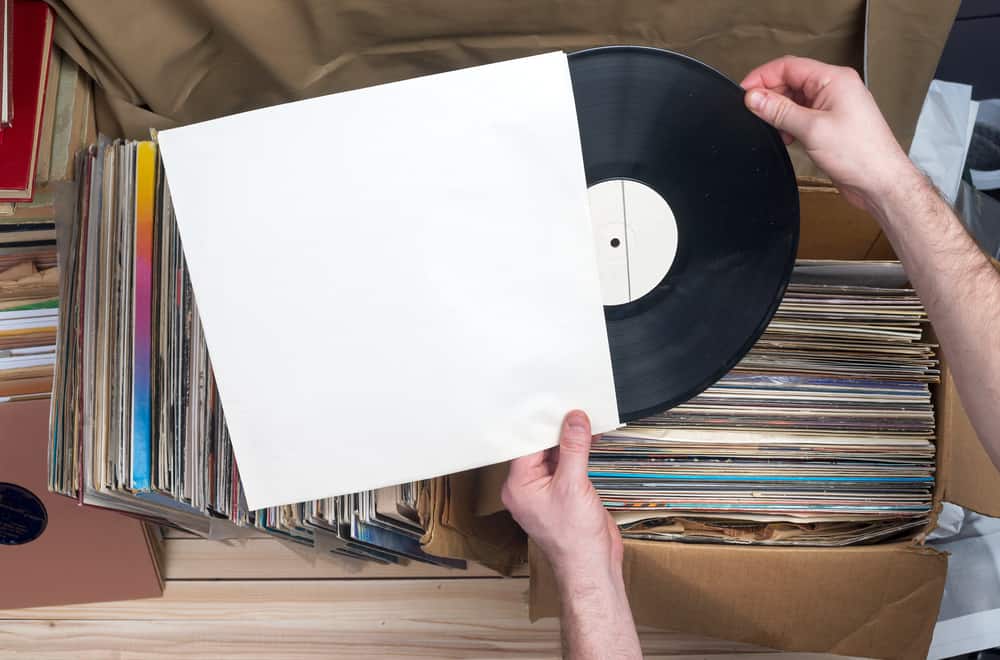 If your record is crackling, there can be several factors at play. Let’s look at some of the common faults that make a record crackle.

1. Problems during the production

The production phase of vinyl records involves a lot of cutting and trimming. One wrong move and the record might become faulty. If this is the case, the company will take responsibility for such faults. But if you DIYed the record at your home, you might have to try it once again.

2. Scratches on the surface

Record scratches are the most common culprits of record crackling. So, it is imperative to handle your vinyl records with care. One should always catch the records at the edges and edges and not touch the record surface at all if possible.

3. Dirt or grease on the surface

Oil from the fingerprint and dust deposits – what a horrendous combo! This combination might be why your records are crackling. That’s the reason why one must always wash hands properly or wear a pair of gloves before handling a vinyl record.

Now, if the records are crackling, it’s not always that they themselves are at fault. Faulty speakers might also be one of the reasons why the sound is crackling. If each of your records is crackling, make sure to check if the speakers are working well.

So, now you know how the vinyl records work, don’t you? With all this information, you can now listen to a record in peace and know what’s exactly going on inside the player. What a wonderful feeling!

Well, also consider giving your two cents during a vinyl record conversation with your audiophile friends. After all, knowledge shared is knowledge squared. And in the meantime, if you have any confusion, feel free to drop a comment down below. We’re all ears!