For your ease, this comprehensive guide has all the details you need to know regarding vinyl record types, sizes, and even speed. So, what are we waiting for? Let’s dive deep and find out more about vinyl records!

Vinyl records play and different speeds. RPM means revolution per minute, i.e., the number of times the record rotates on the turntable in a minute. One might hear the sound slower or faster instead of melodious record songs if the RPM is not adjusted accordingly on the record player.

Records offer the best sound quality when turned at a higher RPM. But on the downside, when the RPM of a record increases, the playback time it offers decreases.

Emile Burner, in 1888, created records that were played between 70 and 80 speeds. Following her, many audio manufacturers produced record players similarly – the players were 3600 RPM electric motor driven, making 78 RPM the standard record speed by 1925.

The sizes vary, but in general, the 10-inch size started becoming the standard size for 78 RPM records.

However,  in addition to shorter playback time, other various shortcomings accompanied 78 RPM records. These records were found to be more brittle and prone to shattering. These days, 78 RPM records are not in production and many records player doesn’t even provide this speed option anymore.

However, unlike 78 RPM records, 33 1/3 didn’t have a smooth start. By the time 78 records were popular as the standard, other methods of music storage such as CDs had already started making an appearance commercially.

And, by the time 33 1/3 RPM records were in production, radios were the primary source of listening entertainment. However, these records were still the preferred music storage basis for record companies, as these records offered more playback time and also proved to be more financially desirable.

In 1948, Columbia records marketed and sold 33 1/3 records as devices able to play entire classical performances and symphonies without having to flip it, and that’s when these records started creating an impact in the commercial market.

RCA Victor released 45 RPM records around the 1950s so as to compete with Columbia’s 33 1/3. 45 records were smaller in terms of size. As plenty of popular radio hits of the time were stored in 45, which only offered one song per side, these records were given the name – singles.

For records to be able to play 78 RPM records, the turntables require specific needles and alteration. So, by the 1950s, companies were more focused on developing a playing system that played 33 1/3 and 45 RPM, and 78 records shortly dropped out of the market.

From the 1960s to the 1970s, a few rarer RPM vinyl records also were in use. These records had extremely narrow grooves, played super slow, and could fit from 90 to 180 minutes of recordings.

However, these records weren’t popular in the musical industry, as they couldn’t record high-quality music and were only used for non-musical recording purposes. 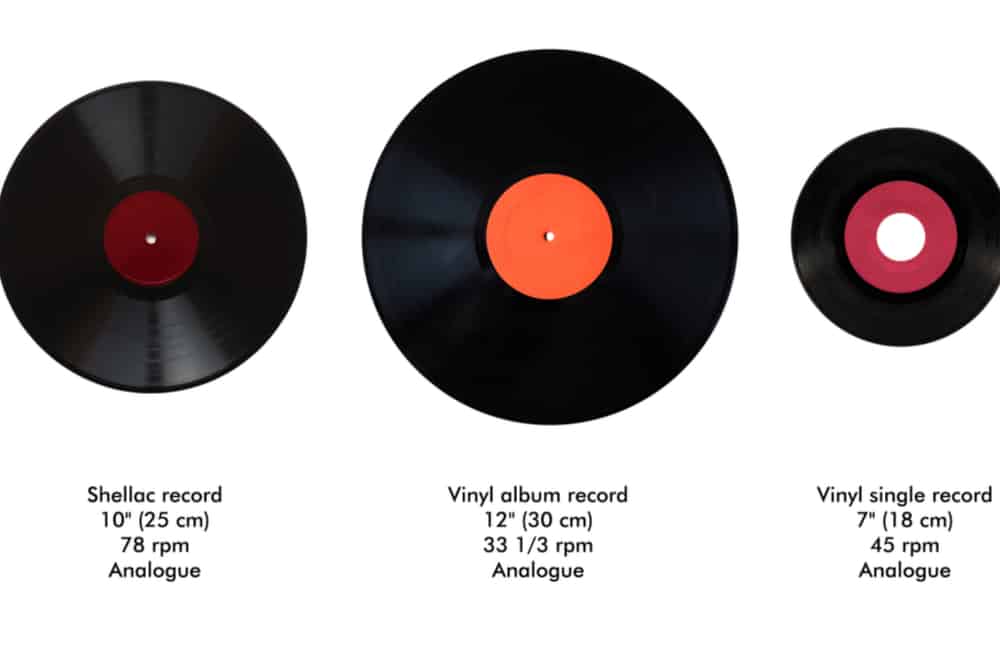 Now, let’s move on to various sizes that vinyl records offer – 12, 10, and 7 inches. For each record size, the more is the RPM of the record; the lesser is the run time, and vice-versa.

12-inch records came as albums as well as singles. Most of these records come with 33 1/3 RPM and offer around 15 to 22 minutes of run-time per side. 12-inch albums featured an entire album, whereas the singles only feature a song of the album.

This size of the vinyl record sometimes comes with 45 RPM speed, which can feature 12 to 15 minutes long recording per side. 12-inch records quickly became the popular choice among club DJs around the 1970s and 1980s and were used to store remix versions of pop songs.

A 10-inch record is too much of wasted space for a pop song and not enough space for two. So, this size is rarest among the three when it comes to pop songs recordings.

Moreover, 78 RPM, the long-forgotten speed, often were recorded in 10-inch records, and it could hold about 3 minutes of a song on each side. The most popular songs in those days were of similar duration. So, these records are the rarest and have been attracting many collectors these days.

In the past, many incorrectly assumed that 10-inches records were better to group together for an album release, in the case of pop music, while classical music required longer playback time and, thus, bigger sizes of records for the purpose.

Though 12-inch records were later found to serve the best in both case scenarios, several 10-inches multi-disc albums were produced during that period.

Though smallest, it is the most common form of vinyl singles. 45 RPM, which is the most common and recommended speed of 7-inch records, offers a run time of 4 to 6 minutes per side, whereas the time increases to around 7 minutes when these are played at 33 1/3 RPM.

These records were affordable and a great alternative to fragile 78 RPM shellac records, culminating during the 1950s.

Now that we’ve educated ourselves regarding the speeds and sizes of vinyl records let’s dive deep to find out its types. 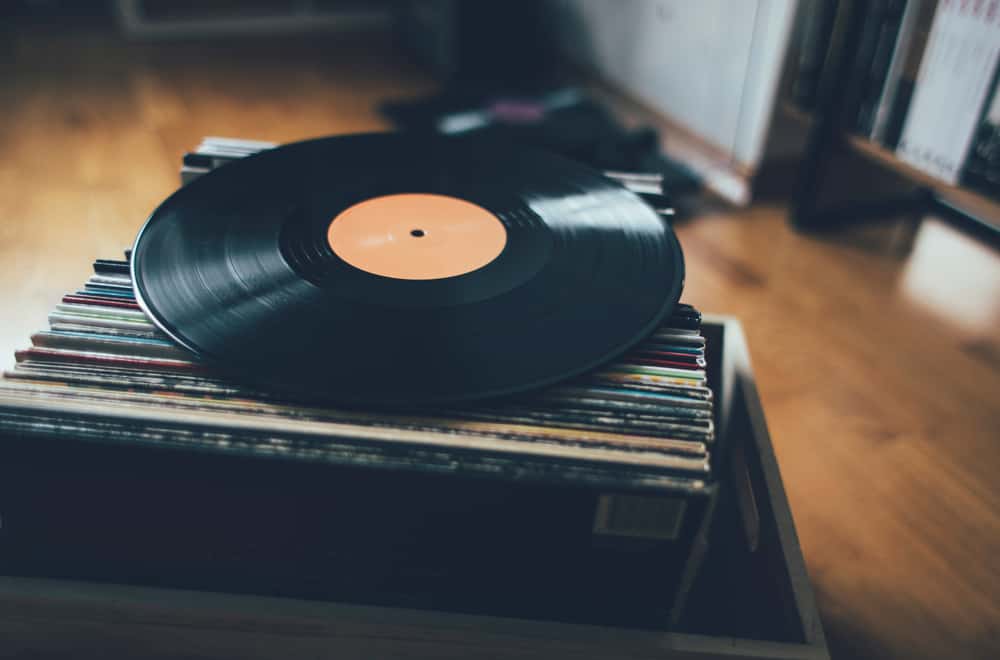 Long-playing records (LP) were introduced in 1948 and held around 15 to 22 minutes long music per side, i.e., 30 to 44 minutes of music including both sides. Due to this impressively long playback time, these were used for releasing albums.

Initially, several 10-inch records were grouped to create LPs. However, modern LPs are commonly 12-inch vinyl records playing at a speed of 33 1/3 RPM. However, due to the superior sound quality and lower distortion of 45 RPM LPs, many LP these days play at 45 RPM. 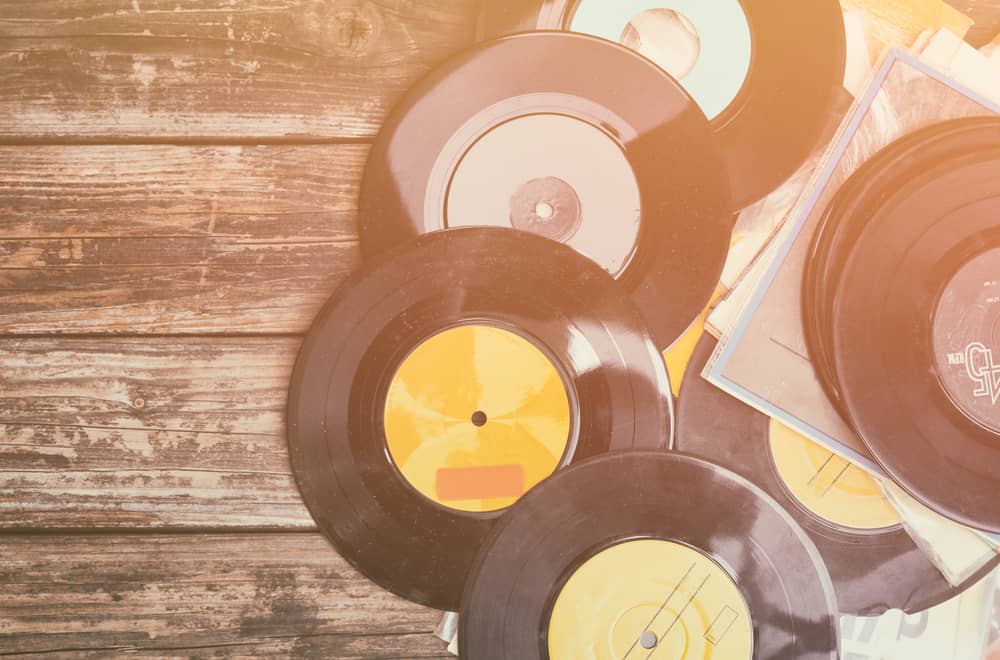 Extended play records have a run time that is shorter than long-playing records and longer than vinyl singles. Eps don’t have a standard format and are recorded in 12-inch, 10-inch, or 7-inch records. However, 10-inch EP records are quite rare as the other formats are.

Likewise, EP may run at 45 RPM or 33 1/3 RPM. So, depending upon the size and the speed, the run time of EP records can vary significantly.

Generally, EP is less expensive than LP and holds a lesser number of songs than a long-playing album and more songs than the singles, i.e., around 4 to 5 tracks. 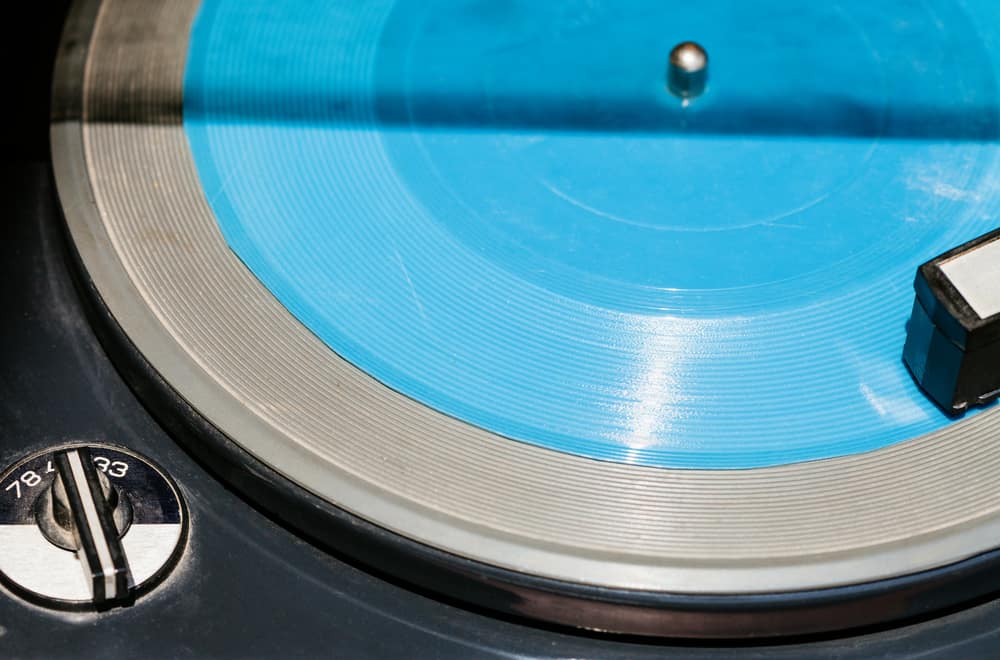 In the 1980s, many magazines would use records made out of thin, flexible vinyl sheets featuring popular hits and tracks of the time. However, the quality that was produced out of thin material and shallow grooves was in no way comparable to the regular vinyl records. 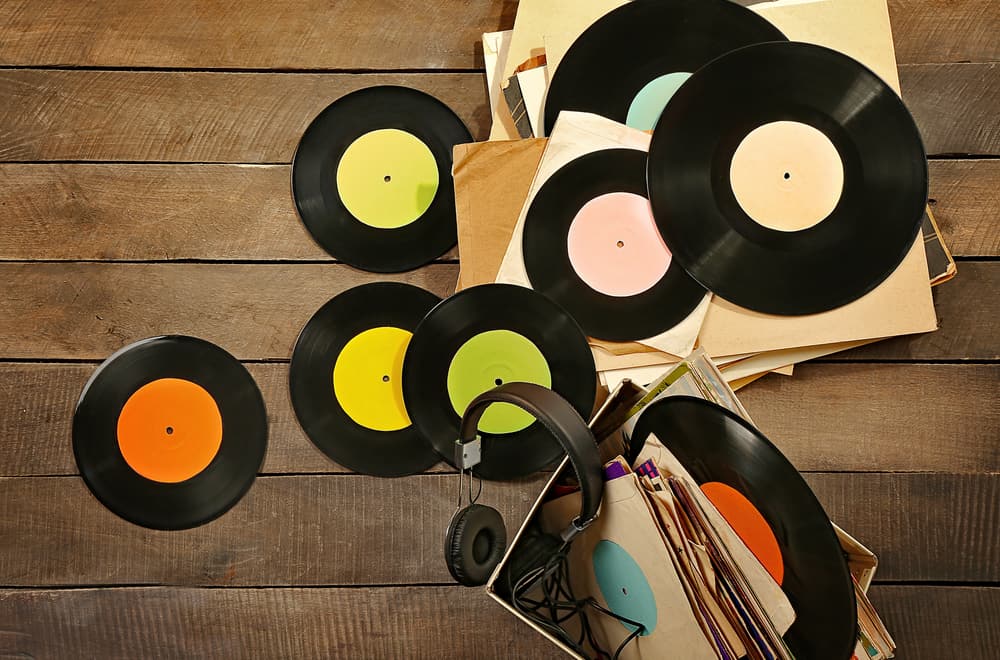 The way vinyl records look and play is, no doubt,  aesthetically charming. However, these days, many choose fancy colored records instead of the popular plain black records.

Many still debate whether or not coloring these records impact the sound quality in any way but no evidence supporting this doubt has come to light yet.

Recording studios create a sample of the vinyl record before moving on to create a master for mass production. These sample records are called dubplates.

We’ve included all the speeds, sizes, and types that vinyl records have featured in history or are offering to date in this post.

With the slow and impactful return of vinyl records these days, it is imperative that one must keep abreast of its fundamentals. By now, you also know that 10-inch vinyl records are the rarest and how desperately collectors are trying to get their hands on them.

With this comprehensive guide, we hope to have cleared all your doubts and confusion regarding the topic. And, if you have any further queries, let us know. We’re all ears!